From Newton to Schrödinger 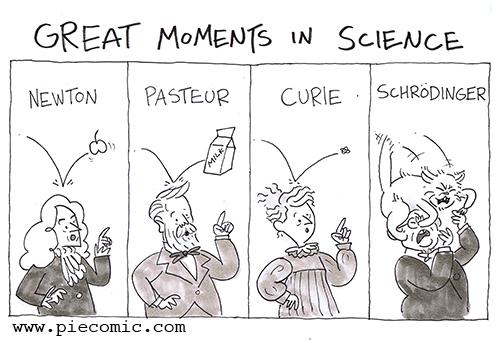 Starting in the late 1800’s, experimental physicists began to make observations that challenged the “classical” equations of physics. What emerged was quantum mechanics. Quantum mechanics unifies and supersedes the theories of classical Newtonian mechanics and classical Maxwellian electromagnetism.

The wave-like-ness of matter immediately leads to something called quantization. Matter is “chunky.” There is no such thing as “half an electron.” One always has an integer number of elementary particles. So if I give you a system containing some number of electrons, you can safely say that the total mass of the system is

where \(m_e\) is the mass of the electron and \(n_e\) is a nonnegative integer. Using mass-energy equivalence, this means that the energy of these electrons should also be discrete

Waves, however do not seem to be “chunky”. If I want to put more energy into a wave, I can increase its amplitude or increase its frequency (by an noninteger amount). So it would seem possible to make waves with any amount of energy. It was Max Planck, in 1900, that proposed that there should also be a “quantization” of radiation, and that radiation should come in integer chunks, with the energy proportional to the frequency of the radiation:

Planck’s constant is very small, which explains why electromagnetic radiation does not seem to be “chunky” in everyday life. Similarly, the masses and charges of elementary particles are very small, which is why Newtonian mechanics is accurate enough to describe macroscopic phenomena. However, it is essential to include quantum effects when we deal with particles with very little mass (e.g., electrons).

Planck proposed the quantization of radiation as a mathematical trick to provide a model for blackbody radiation. In 1905, Einstein interpreted this trick in the most literal possible way, proposing the quantization of light. This interpretation led to an interpretation of the photoelectric effect, which eventually earned Einstein the Nobel Prize in Physics. Planck also won the Nobel Prize in physics.

3.3. How was Quantum Mechanics Discovered?¶

It is impossible to fully explain the historical foundations of quantum mechanics in a course like this one. Instead, I will try to give you a very brief overview of some key experiments that changed physics.

An inflammable object that absorbs all incident light, but does not transmit or reflect light, is called a black body. Because it is totally opaque and absorbs all light that falls upon it, a black body at zero Kelvin is the very definition of black. However, when you heat a blackbody, it glows. A good (but not perfect) example of a black body is a red-hot poker. An even better example is the sun. Blackbody radiation has been observed by humans for millennia (or even longer): lava flows, molten glass, molten metal, and many other materials can be considered blackbodies. So it was extremely embarrassing to 19th-century physicists that they could not predict the spectrum—that is, which wavelengths of light occur with what intensity—of a blackbody.

In principle the spectrum of a black body should be easy to describe with classical statistical mechanics. However, classical statistical mechanics predicted that most of the light emitted would have a very short wavelength, the so-called “ultraviolet catastrophe.” Planck suggested that the vibrations of atoms in a black body, and ergo the light emitted therefrom, was quantized into chunks. Planck understood that his result was significant, but he still thought of it as a mathematical trick. Einstein decided to take Planck’s mathematical expression at face value, and interpret light as coming in chunks called photons, with energy given by Planck’s expression:

This allowed him to describe the photoelectric effect. Specifically, whenever \(h \nu \) was less than a threshold value for the substance called its work function, \(W\), no light would be emitted. (The work function can be thought of as the “ionization potential” for a metal.) But when \(h \nu > W\), then photons had enough energy to remove an electron from the metal, and the surplus energy from the photon could be imparted to the electron as kinetic energy. Ergo

When you shine light on an (isolated) electron sitting at rest, sometimes the light scatters inelastically—that is the emitted light has a lower frequency than the incident light. The change in energy between the incident and emitted light is manifest in the kinetic energy of the electron. However, it’s observed that the electron does not move in an arbitrary direction, but instead moves in the direction that would be expected if a photon were a classical particle moving at the speed of light with effective mass \(m_{ph,\text{eff}} = \tfrac{h \nu}{c^2}\). Note that the photon does not actually have mass. However, the photon does have momentum, which explains the inelastic scattering result. The formula is derived by assuming that one can set the rest-mass-energy expression, \(E = m c^2\), to the Planck relation for the energy of a photon. Then

and the momentum of the photon would be its effective mass times its speed, \(c\):

Recall that the wavelength, \(\lambda\), and frequency, \(\nu\) of light are related according to the relation

This means that the momentum of light can be expressed as 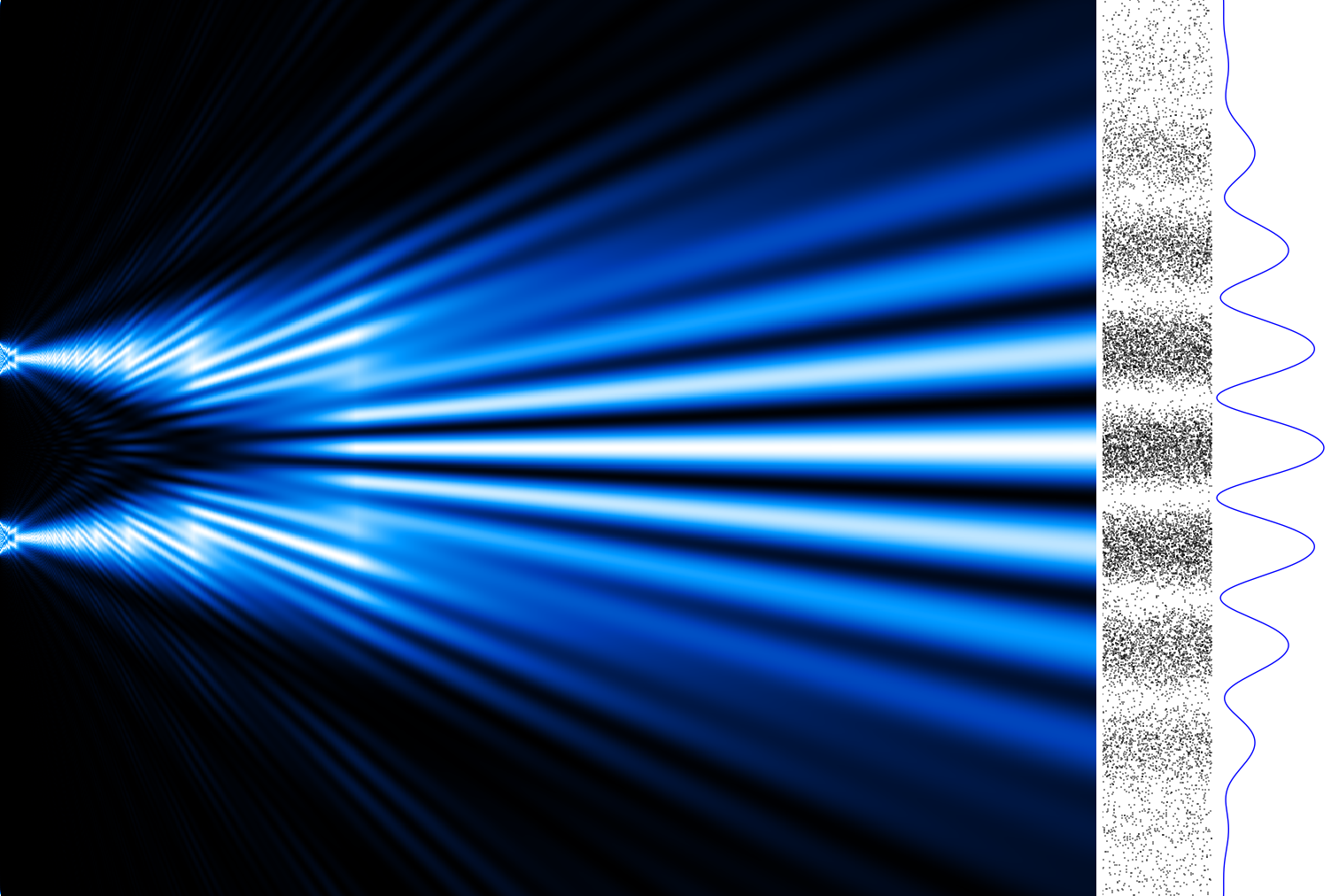 By the late 1800s, it was known that when an dilute atomic gas was heated, it did not emit as a black body, but only at certain characteristic wavelengths. Rydberg managed to describe the specific wavelengths of the emission by the empirical formula

This suggests that photons are associated with transitions between energy levels that are labelled by indices, suggesting that the electronic energy levels of atoms are not arbitrary, but only have certain, quantized, values. The Rydberg formula is accurate for all one-electron atoms (at least until relativistic effects become nonneglible). It is also valid for highly-excited states (so-called Rydberg excitations) of many-electron atoms, where a single highly-excited electron is much further from the nucleus than the other electrons.

It seems as though we must use sometimes the one theory and sometimes the other, while at times we may use either. We are faced with a new kind of difficulty. We have two contradictory pictures of reality; separately neither of them fully explains the phenomena … but together they do. - Albert Einstein

The previous experiments, among many others, established that particles like electrons have wave-like properties, that electromagnetic radiation is composed of discrete photons with particle-like momentum and energy. The fact particles possess wave-like properties and waves provide particle-like properties is called wave-particle duality: there is only one type of “stuff” in the universe and that stuff is “chunky” (like particles) and can constructively and deconstructively interfere (like waves). Moreover, the energies of atoms and molecules are quantized, having only specific discrete values. It seems that, in physics, the more we learn, the simpler things become. We used to believe that there were two types of things, “particles” (matter) and “waves” (radiation). Now we understand that there is really only one type of entity, perhaps call it a wavicle if you must give it a name. Electromagnetic radiation comes in discrete chunks (photons) just like particles (e.g., electrons). Photons and particles have position(ish), momentum(ish), and energy(ish), just like classical particles of matter; both also can manifest constructive and deconstructive interference, just like classical waves. The difference between matter and radiation is merley one of perspective.

In 1925-26, Heisenberg and Schrödinger, working independently, built mathematical frameworks to describe the wave-particle duality of quantum particles. Nowadays we usually (except sometimes in spectroscopy) prefer Schrödinger’s formulation. We will discuss the Schrödinger equation in more detail in the next unit, but for now it is worth merely comparing it to other equations from classical mechanics and classical electromagnetism, just to intuitively show how it encapsulates wave-particle duality. Of course, a more rigorous justification for the Schrödinger equation is beyond the scope of this course.

For simplicity, we will only consider systems in one dimension.

The solution, \(\Psi(x,t)\) to the Schrödinger equation is called the wavefunction. A key postulate of quantum mechanics is that the wavefunction contains all the information needed to fully specify the observable properties of a quantum system.


All three equations have strong resemblance. But, in particular, the Schrödinger equation and the Hamilton-Jacobi equation are consistent with each other. Suppose one uses the wavefunction ansatz,

where \(\psi_0(x,t)\) and \(S(x,t)\) are, without loss of generality, assumed to be real-valued functions. We will insert this expression into the Schrödinger equation, but first it is useful to define the quantity

One then can rewrite the wavefunction and the Schrödinger equation without the pesky factors of \(2 \pi\), respectively,

Inserting the wavefunction into the Schrödinger equation, the left-hand-side is

and the right-hand-side is

Inserting these equations into the Schrödinger equation and dividing through by \(e^{\frac{i S(x,t)}{\hbar}}\) gives:

The real and imaginary parts of this equation must be separately equal to each other. The real part of the equation is

Dividing both sides by \(\psi_0(x,t)\) and taking the classical limit, where \(\hbar \rightarrow 0\), gives back the Hamilton-Jacobi equation,

The imaginary part of the equation is:

This expression resembles the equation of continuity from classical physics,

where \(v(x,t)\) is the velocity and \(\rho(x,t)\) is the density, the probability of observing a particle at the point \(x\) and the time \(t\). This (re)confirms that \(\nabla S\) is an expression for the momentum, and suggests that

is an expression for the probability of observing a particle at a point in space. The identification of the square-magnitude of the quantum-mechanical wavefunction with probability is called the Born postulate.

We can rationalize the form of the quantum mechanical momentum operator, \(\hat{p} = -i \hbar \frac{d}{dx} \) , by a similar argument. Applying the hypothesized momentum operator to the wavefunction, one obtains:

This indicates that the quantum-mechanical momentum operator is consistent with the classical expression for the momentum, to which it reduces in the classical limit where \(\hbar \rightarrow 0\).

Imagine you were assigned to describe Quantum Mechanics to a room full of irrascible tweens.

My favorite sources for this material are:

There are also some excellent wikipedia articles: